The American Library Association held their midwinter 2011 meeting in San Diego this year. San Diego just happens to be the city in which I currently reside, so it would have been pretty STUPID of me if I hadn’t gone. So, I went!

The awesome editor of my kid’s books, Margaret Miller, scored me a floor badge, which meant I got to stalk the exhibition hall without paying a red cent. Ha! Who’s stupid now?! Even though we’ve done two books together, I hadn’t yet met Margaret in person. As you can see from the photo below, she’s a very serious person and our meeting could be best described in terms of very seriousness. That’s the Bloomsbury gang sign we’re making. It’s a doggy. 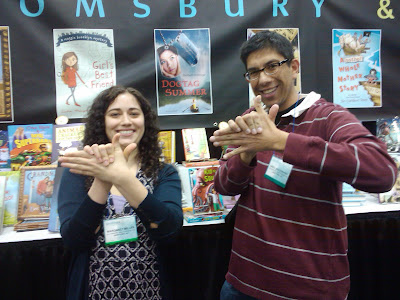 Mere moments after I started touring the exhibitions (populated by publishers offering ARCs — advanced reader copies — of their upcoming books, vendors selling everything from library book return bins to elaborate book-scanning robots utilizing vacuum technology to turn pages, and librarian foot-relief products) I ran into super agent Barry Goldblatt. Barry’s not my super agent, but his agency represents several of my friends, and his love of books and writers is always infectious. I asked him which of his clients’ ARCs I should seek, but since they were in such high demand at the conference I managed to collect none of them. NONE! Who’s stupid now? (Me. I should have showed up on Saturday instead of Sunday.)

After I’d seen the entire floor, Editor Margaret and I repaired to an Irish pub for a pleasant chat. I like working with smart, personable, dedicated professionals. Have I mentioned I like working with Margaret? Then, that evening, she very kindly took me and my girlfriend out to a delicious dinner at a place with tiki torches out in front. Greg likes flames. Also present were Bloomsbury’s head of library marketing, Beth Eller, Walker editor Emily Easton, and picture book author Candace Ryan. Really great conversation about books and publishing and writers and writing and suchlike. A lot of fun.

So, that was my first ALA. I hope to go to more of them, even if they’re not conveniently located a mere fifteen minutes from my front door.