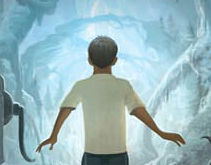 In The Boy at the End of the World, I describe Fisher, the protagonist,  as darkly pigmented.

Here are the passages:

From pages 17 and 18, when Click is telling Fisher about the concept of clothing:

Your skin is darkly pigmented to give you some protection from sun exposure.

And on page 106, when Fisher is looking at his reflection in water.

His own reflection stared back him, dark and lean and scratched.

I wrote Fisher as a boy who is artificially bred in a pod from a broad mix of genetic material. He’s a far-future analog to a person of mixed race.

Maybe now’s a good time to say a few words about myself. My parents are both Dutch-Indonesian, or Indo. That means something else than just the offspring of one Dutch parent and one Indonesian parent. Indos came about from the Dutch colonization of Indonesia, and from those colonists having children with Indonesians, giving rise to a distinct culture, neither Dutch nor Indonesian.

As I said, Fisher’s a mix of things. Growing up, I didn’t see many brown-skinned heroes on book covers, and I wanted to look at Fisher on the cover and be able to see someone whom I could imagine being me.

When it came time to develop the cover, my publisher asked for my input. Often, authors have no participation in the development of their covers, so I was really pleased that Bloomsbury asked for my thoughts. I found a graphic from an anthropology website showing the range of human skin tones across the world (there’re a lot more than just white, brown, and black), and I indicated the range of skin tones I thought would be right for Fisher.

In the first version of the cover, Fisher’s skin tone was well within the range I’d indicated. The problem was that he was standing in shadow, and what looked brown in a color swatch looked like white skin in shadow on the cover. The hair was too light, too, I thought.

My editor sent the art back to the artist. After another couple of attempts, I thought they got it right. I look at Fisher, and you know what I see? I see a brown kid. He could be multiracial. He could be Indo. Maybe people will see a Latino kid. Maybe they’ll see a kid from somewhere in Asia. If people see a white kid with a tan, that’s okay, too. I like that people don’t know quite what to make of him. It feels cozily familiar.

When I look at Fisher on the cover, I see someone who could have been me when I was twelve. As a brown, ethnically ambiguous, multiracial person, I’m really happy about that.

(By the way, comments are welcome, but I screen them. Not because I fear controversy, but because spammers are EATING MY SOUL. If you post a comment — and you’re not a SOUL-EATING SPAMBOT — it’ll appear as soon as I get a chance to unscreen it.)