It feels like a did a million and eight things this weekend.

Friday afternoon I visited the Casita Center for Science, Technology, and Math elementary school in Oceanside and faced down 300 third, fourth, and fifth graders with nothing but a microphone, a copy of The Boy at the End of the World, and a PowerPoint slideshow and LCD monitor that rendered all my slides green. 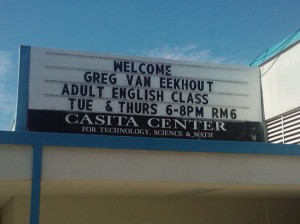 At first the kids’ attire confused me, because a bunch of them were dressed in jeans and white t-shirts and leather jackets, and I don’t keep up with fashion and I wondered if Arthur Fonzarelli was a thing again. Turned out it was 50’s day, which made sense, because we had 50’s days at Linwood E. Howe Elementary, so what was initially strange became suddenly familiar.

I think my favorite moment from the visit happened when I was setting up at the front of the cafeteria and a girl sitting on the floor leaned forward and told me she liked the cover of my book because the boy is brown, like me.

If you do school visits, you probably already know this, but it’s a good idea to have giveaways — bookmarks, post cards, whatever — that you can sign, because you will be swarmed by kids wanting your autograph. On slips of paper. On their binders. Or their backpacks. Or their shirts. Or arms. I ran out of bookmarks and it was scary. But also, of course, really, really funny and sweet.

After the visit, I spent a few hours writing at Starbucks and then grabbed a quick dinner at a corporate restaurant. I always feel safe with the innovative egg roll appetizer product.  Having successfully fed, I headed over to the Oeanside B&N for a two-hour signing held in conjunction with a Casita Center fundraiser. The kids had traded their fifties outfits for jammies, and I felt a little like a delicate vase perched in the middle of a slumber party. Chatted with a bunch of the kids and a bunch of parents and signed a bunch of books. Fun.

Saturday, Lisa and I spent the night at a B&B in San Clemente, where we did the things we usually do on trips: walk a lot, eat, and troll bookshops. Found a really good one, where I bought The Last Kingdom by Bernard Cornwell, about King Alfred vs. Danes. So far I’m rooting for the Danes. 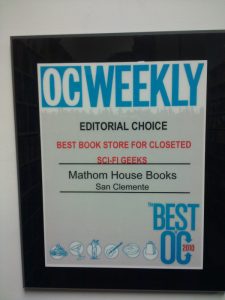 Then, Sunday, we broke through the Orange Curtain and headed up to Costa Mesa for the Orange County Children’s Book Festival. I think I read they got 30K attendees? I was on a middle-grade author panel with Gitty Daneshvori, Greg Taylor, Mark Jeffreys, and Helen Stringer. Here’s a short clip:

After the panel, we all signed at the Mysterious Galaxy booth. Here’s a pic of that. It looks like I’ve got the rapt attention of these people. What’s really happening is the little boy is putting a bookmark in my display copy, and the dad is telling him the book’s not his, that it belongs to me, and then he’s trying to drag the kid away without either the book or the bookmark, and the kid is trying to tell him that the book may not be his but the bookmark is. 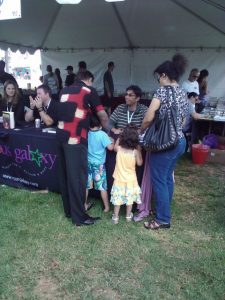 That’s how it goes.

There was also a petting zoo. I liked the baby goats.

There’re a lot of people who work really hard to get kids reading and to get them excited about books and authors, and I saw a lot of them this weekend: the principal and librarian and teachers at Casita Center, events manager Connie at B&N in Oceanside, the crew at the always awesome Mysterious Galaxy, Robin Hawke and all the staff and volunteers at the OC Children’s Book Festival (including the ladies directing traffic in the parking lot who exuded huge excitement whenever someone pulled in and told them they were an author), and, of course, the kid readers, who treat authors as though we’re much bigger deals than most of us are.

I’m struggling to finish revising my current book, and it’s hard. Weekends like this help.