I’m a big fan of Deb Coates’ modern fantasy, Wide Open, which I read in manuscript at the Blue Heaven writers’ workshop. I liked her voice, I liked her characters, I liked her settings. I liked her book. A lot. I liked it so much that, after she sold it to Tor Books, I didn’t wait to be asked for a blurb, instead I very presumptuously offered one, because I was afraid that nobody would ask me for a blurb, because the VAST MAJORITY of books released each year do not actually feature blurbs from me, but this one does, and here’s what it says:

“A great blast of fresh air. From the intimate story of a young woman haunted by forces both natural and supernatural, to the grand scope of godlike elementals, Deborah Coates demonstrates a sure storytelling hand…. Wide Open is the impressive debut of a distinct new voice in fantasy.”

I mean every one of those words most sincerely. Wide Open is something different. It’s not urban fantasy, I don’t know if it should be called rural fantasy, or what. It’s its own thing, and the thing it is, is very, very good. 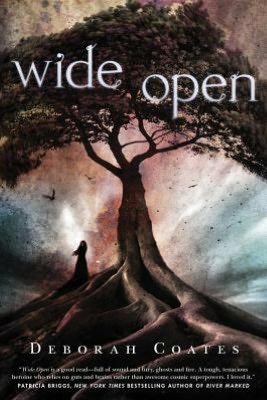 When Sergeant Hallie Michaels comes back to South Dakota from Afghanistan on ten days’ compassionate leave, her sister Dell’s ghost is waiting at the airport to greet her.

The sheriff says that Dell’s death was suicide, but Hallie doesn’t believe it. Something happened or Dell’s ghost wouldn’t still be hanging around. Friends and family, mourning Dell’s loss, think Hallie’s letting her grief interfere with her judgment.

The one person who seems willing to listen is the deputy sheriff, Boyd Davies, who shows up everywhere and helps when he doesn’t have to.

As Hallie asks more questions, she attracts new ghosts, women who disappeared without a trace.  Soon, someone’s trying to beat her up, burn down her father’s ranch, and stop her investigation.

Hallie’s going to need Boyd, her friends, and all the ghosts she can find to defeat an enemy who has an unimaginable ancient power at his command.

Buy at from an independent.
Buy at Barnes and Noble.
Buy at Amazon.