Whenever possible, I like to visit the settings I write about. That way, I pick up cool little details that help bring a place to life. Also, it’s just fun to go places. The opening chapters of the book I’m writing take place around the Salton Sea, only a few hours from San Diego, and it took no arm twisting to convince Lisa that we should drive into the desert and check it out.

You can look this up yourself, but the very basic thing you need to know about the Salton Sea is that it shouldn’t be there. Its existence is due to an accident in the early 1900’s in which an outflow channel of the Colorado River broke open and flooded some 500 square miles of desert. And its continuation is due to the typical Californian mix of real-estate speculation, water-rights wars, and lunatic dreams. And its current decline is due to reality. It now exists as a massive, hypersaline, inland sea full of dead and dying fish, surrounded by trailer parks, empty campgrounds, and slow-motion apocalypse.

Our first stop was the Mud Pots in Niland. This is a field of mini-volcanoes where geothermal activity pushes steam and mud up through the earth. 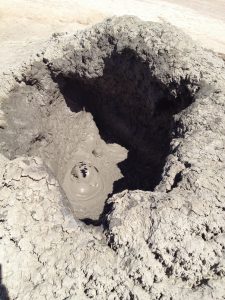 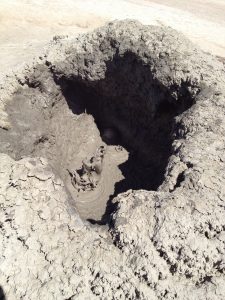 The mud is cool and smooth and the place gulps and gurgles and hisses. 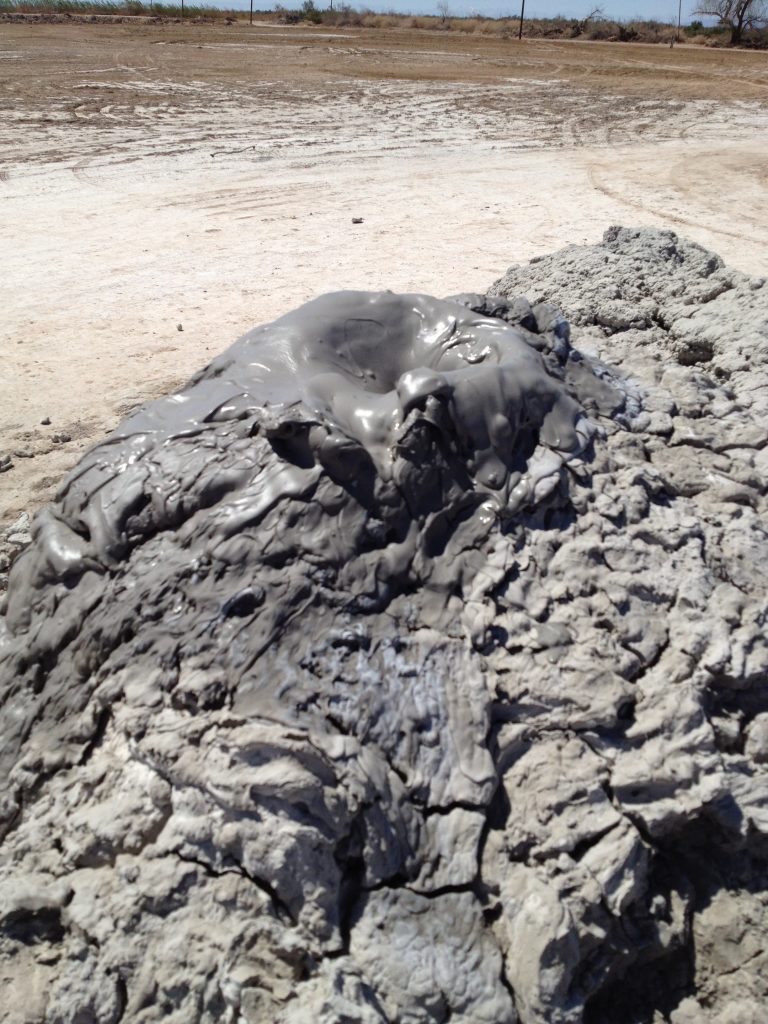 The mud’s also kinda messy, especially when you sink knee-deep into it and didn’t bring a spare pare of shoes and socks and pants. This is after more than five minutes of trying to scrape the mud off me: 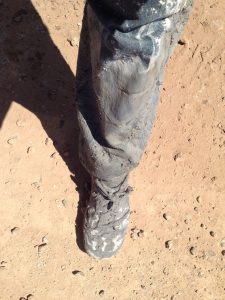 From the Mud Pots, into Niland itself. I don’t know if this was a bank or city hall or what, but it once had some hope and dignity. 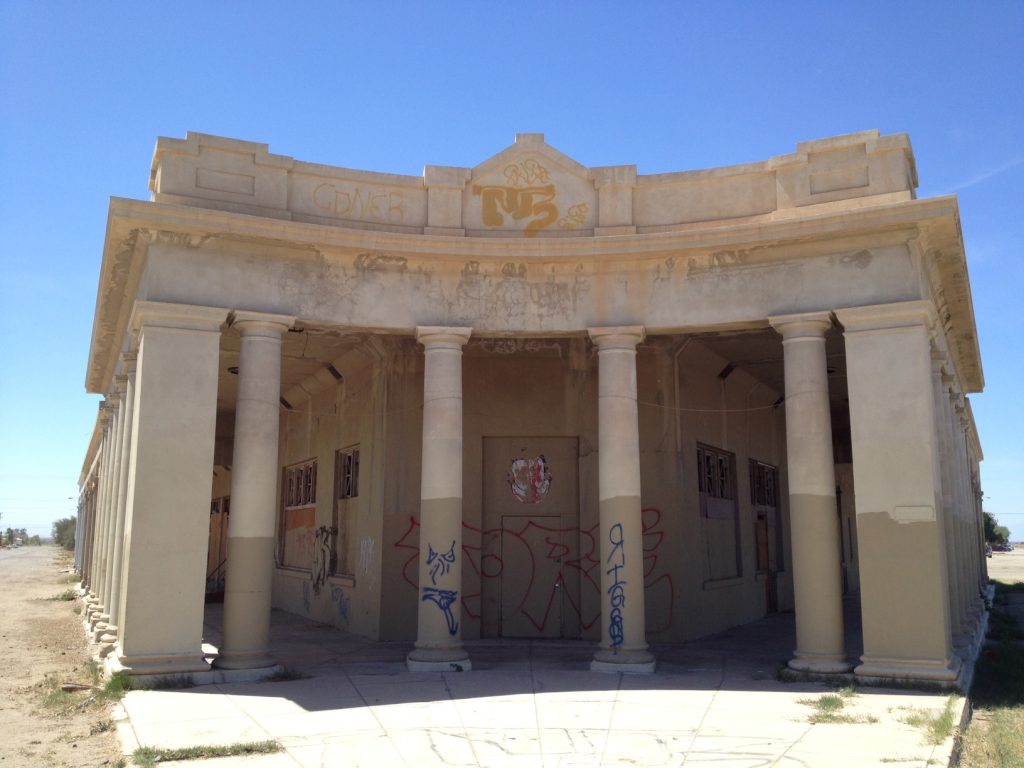 And from there, to Salvation Mountain, a prime example of outsider-devotional art. 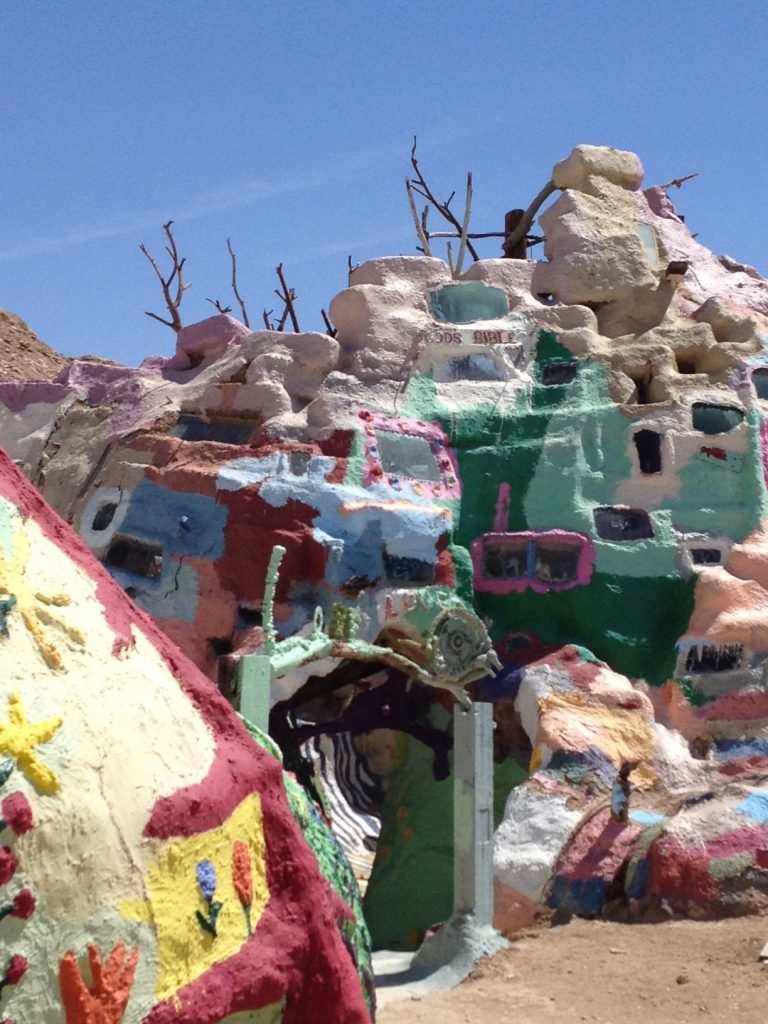 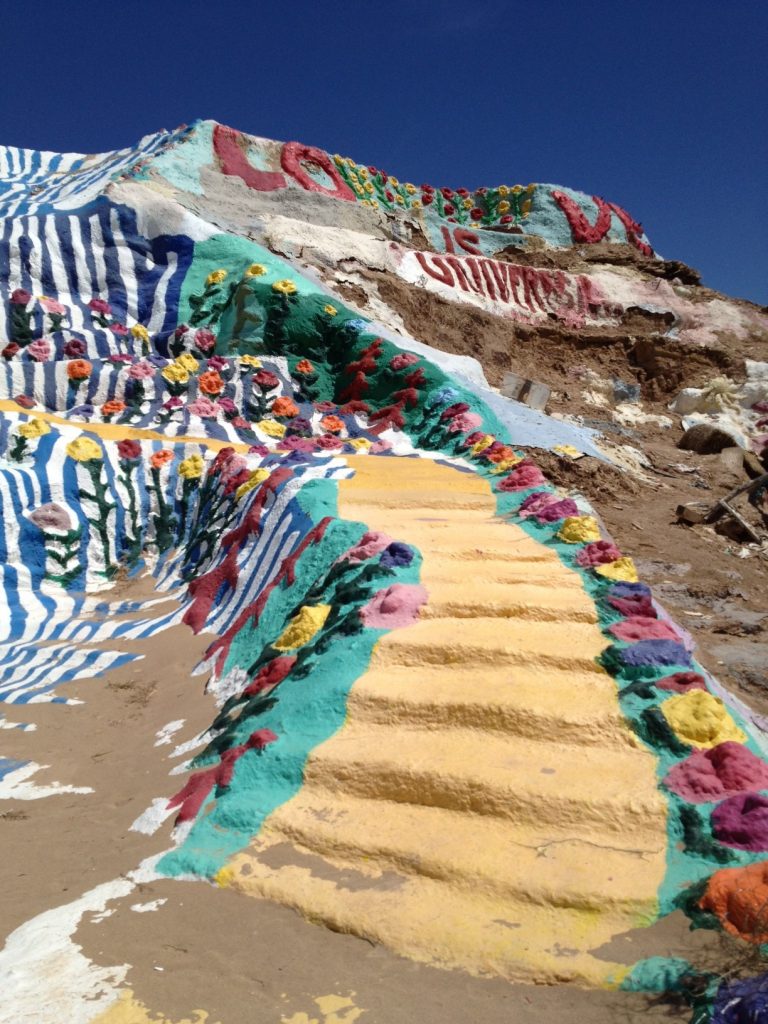 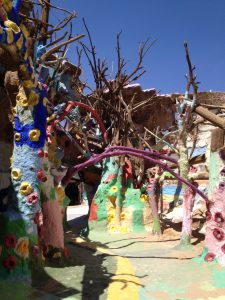 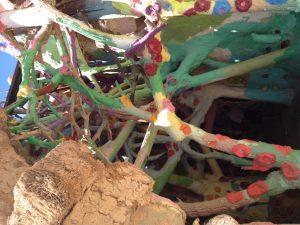 Bombay Beach was once recreational shoreline. Now the beach is made from the crushed remains of millions of fish and barnacles, the water is a rancid soup, and the prime real estate is littered with ruins. 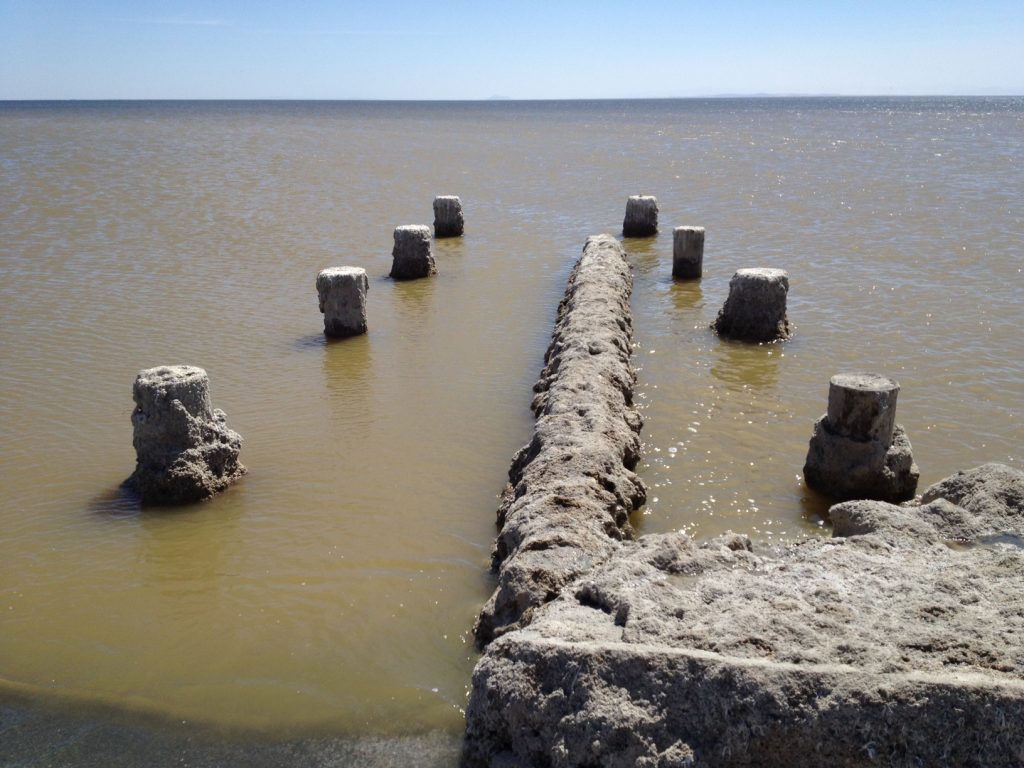 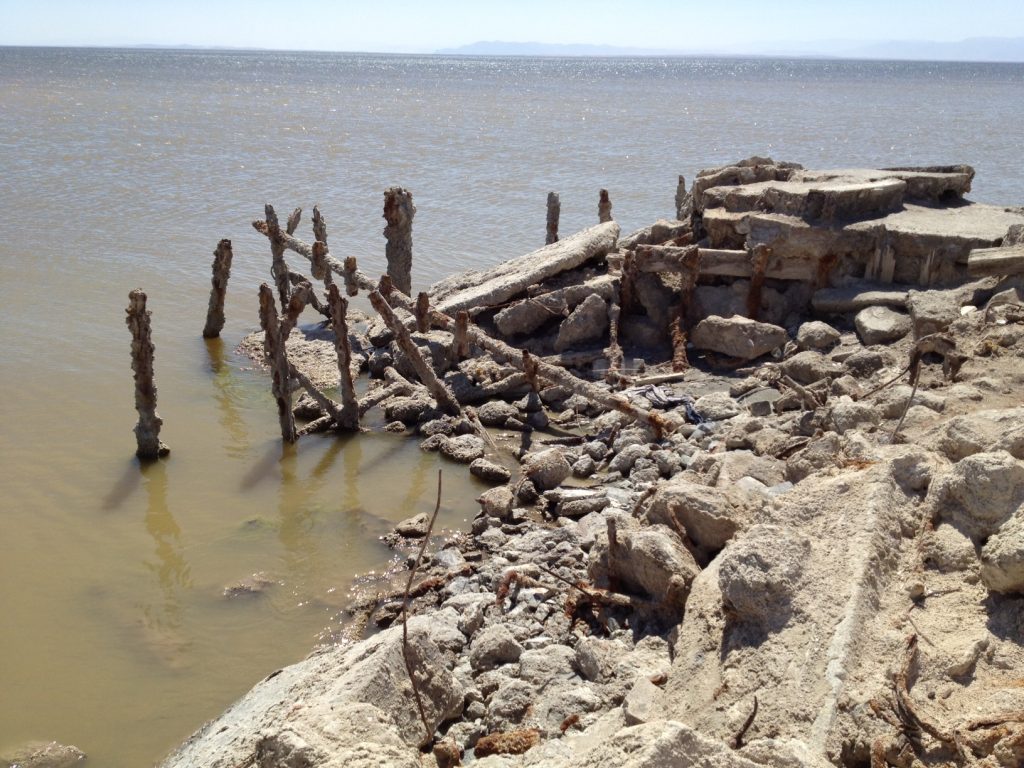 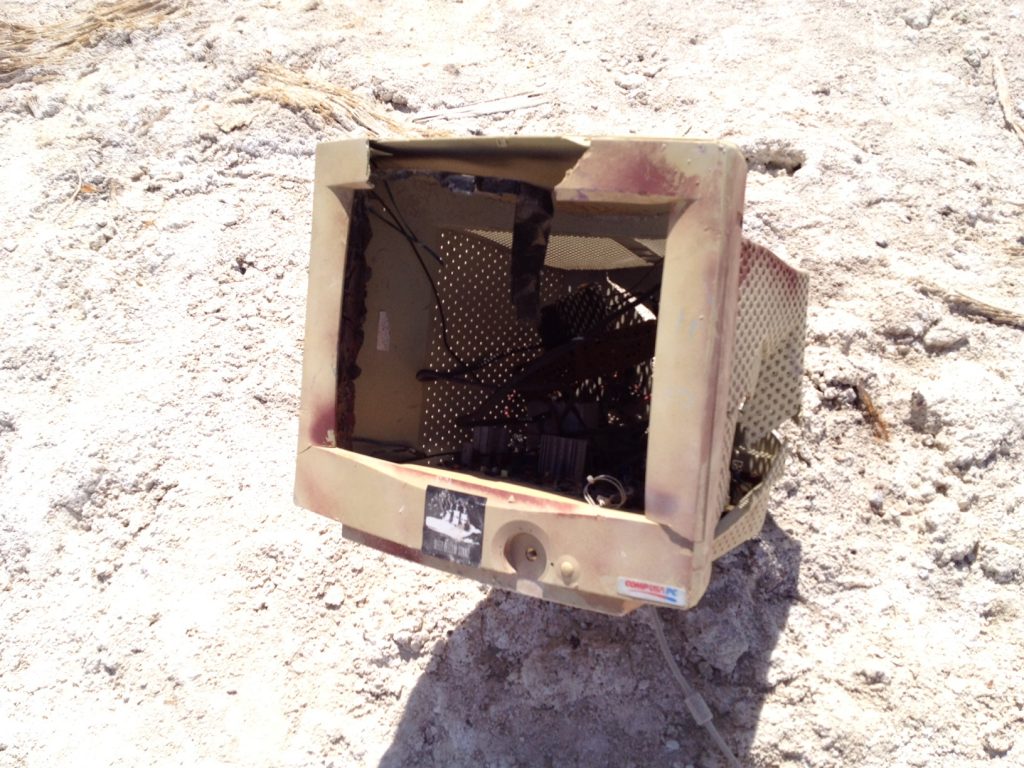 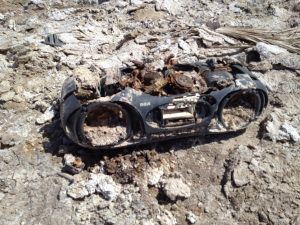 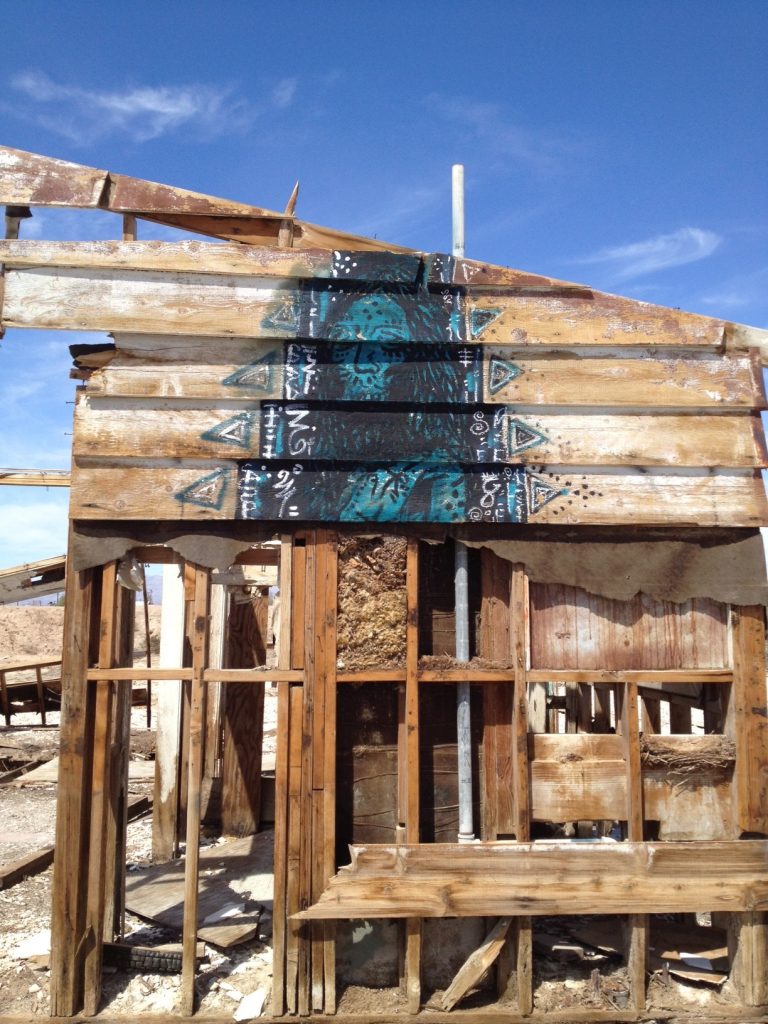 Despite these pics, you get a lot of pretty views driving around the Salton Sea. You get a lot of vast, shimmering, brilliant blue. But at no point does it ever look natural. Sensible. Sane. Even when it’s pretty, it looks strange and wrong and foolish. Then again, I have a lot of foolish dreams, and I live in a city that couldn’t exist without doing wrong things with water, so I can’t judge the people who created and developed the Salton Sea too harshly.