A little background: Diverse Energies is a young-adult anthology of dystopian stories featuring racially, ethnically, and internationally diverse heroes. My story, “Gods of the Dimming Light,” is about an American kid of Indonesian descent caught up in the apocalyptic events of Ragnarok. Ragnarok is an account from Norse mythology of how the world ends. Right?

In the course of ceaselessly scouring the internet for the tiniest crumb of a mention of my name, I came across a review of Diverse Energies. The reviewer didn’t like my story much at all, which is perfectly fine. Okay, well, it’s not perfectly fine, because I want every single human on Earth to love every single thing that I do, but it’s okay if they don’t, honestly.

What I am not okay with is this part of the review:

“…  if we’re going to use mythology in a story featuring a non-white protagonist, does it need to default to a Western one?”

My protagonist in “Gods of the Dimming Light” is an American kid, born and raised in San Diego, California. His parents are from Indonesia. By unlikely coincidence, I’m an American guy, born and raised in Los Angeles, California. My parents are from Indonesia. I’m quite proud of my Indonesian heritage. I’m a little indifferent toward my Dutch heritage. I am critical of America in many ways, but I’m also extremely happy to be an American and very grateful to the country that gave my family a home. None of these feelings contradicts the others.

My skin is brown and my parents weren’t born here and I love a good nasi kuning, but why shouldn’t I play with Western culture? I’m a product of it. I grew up watching American television, reading American books, going to American schools, dropping tokens in American video games in American arcades in American malls. If Norse gods and myths can find a place in American stories, then those are my stories, too. To insist otherwise is to make me a mere spectator to my own culture. It means an Indonesian-American kid can’t pretend to be the cowboy. It means she can’t imagine herself as an elf in a Tolkien-ish fantasy. It means Idris Elba can’t play Heimdall in Thor. The push for diversity should not preclude an Indonesian-American kid from playing in the Western sandbox that he grew up in.

Not for a second do I believe that this is what the reviewer was trying to do. Based on the whole of their review, I do think they want more diverse characters and settings. As do I. And, as a guy whose parents are from Indonesia, I think imagining myself in the stories of Western culture is one of many ways to embrace diversity. 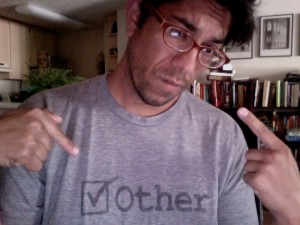